"Down the Rabbit Hole"

This is my first major work written at a gallop, over a number of years in-between the everyday humdrum of life:

It is a 100% self-published novel inspired by the brash, narrative style of Woody Allen (Check out his movie Deconstructing Harry) as well as the timeless imagination of Lewis Carroll with his adventurous character Alice.

There is plenty amiss with this book and I shall one day revise and rethink it, however, for now it's my greatest solo achievement: (self) written, edited, illustrated, printed and published way before the advent of the guided, step-by-step self-publishing giants of today.

'Have you seen the White Rabbit?' Asked Alice.
'Have you?' Grinned the Cheshire Cat.

One could see this book in the pipeline both as a prequel and sequel to "Down the Rabbit Hole"...or not. What follows after tumbling down the rabbit hole? What came before it?

A self consuming oroboros of continuity.

Down the Rabbit Hole 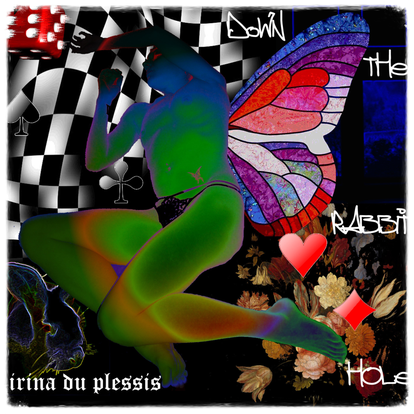 Down the Rabbit Hole

A Perfect Circle fits very well with your book!

I really liked your book. I had the impression that you held my hand and carried me through all the corners of your existence.

It is different, and I love the way you have organised your narrative.

This would make a very good underground book!

Anyway for now I am really enjoying the dark reminiscence of the potential that is viewed through the imagination of youth, especially as it provides an overemphasized parallel to reality, making it more hypnotic and enticing and thus ultimately more un-put-downable by the reader.

Down the Rabbit Hole - a bitter blue pill, that stares you into submission to take a hit and forget your mainstream values. It plunges you down the drainpipe of a mind and into the depths of the self. A quick read, you will either love it or ...never read it. Were there more books like this little enigma - bookshops would sell less diluted, seen-it-all-before, over marketed filth. Down The Rabbit Hole keeps the pace of our lives - read it on the go!

The attractively dark protagonist, who lurks behind her apparent normalcy, is a lost little girl in a strange world. Like Alice in Wonderland trapped in a surreal nightmare, she falls down the rabbit hole, at the mercy of circumstances she cannot control, these circumstances are simply known as life. She is both intrigued and anxious about the games she plays with certain men who cross her path, recognizing they subtly challenge her proclaimed superior talents and intelligence. She is flawed, contradicts herself and the philosophies of others around her, yet shows personal growth as her life continues down a twisted path, moving ever closer to a safe, normal existence.

My dear Irina, I know it looks like a letter, but if you had access to my diary, you would understand why I start like this…;) I finished your book and you told me to write you something at the end, be it something simple word, or anything else… Well, I don't want to go into too much detail about you as my friend and you as the person who wrote her own novel, but I have to say it's the first time I've read anything written by someone I know quite well, and it was a new and very pleasant feeling. The only thing I really regret now is that you didn't publish your book sooner I could read it anytime, not only when I had some free time, but also on the subway, when I wanted to stay in bed and relax… I would have finished it much faster. It's an exciting, intriguing, personal book (and, if you allow me, much too personal maybe - but in the end, I think that we get so many generalities without any purpose that it makes us too weak to understand something and even when we do, we cannot carry the teachings all the way to the end. Honestly I really liked it. I'm not a critic, and as such I'm not going to throw myself into things like this: here you should have done that, that's why you wrote like that, etc, etc, but I'll answer you in my own way.

I found the novel to be quite astonishing, very different from what I’ve read in the past, putting together many aspects of life into one piece: immigration, philosophy, family, love and sex. The book portrays the journey of a teenager maturing during the process of adapting to society. After immigrating to South Africa, she finds an incompatibility between society and herself; moreover she finds comfort in her escapades. Personal thoughts and events are revealed therefore I can say that the novel really captured my attention from the beginning to the end. Apart from this, what grew my attention even more is the fact that I could relate to some of the events presented. Moving back to her home country (Romania) along with her partner was a big step for her. She continues to come across unpleasant obstacles yet in the final round manages to find a balance in her life. Overall, I truly think that one can learn something from this novel.

This was a surprisingly interesting book to read for me and I found reading it an unusual experience. The book has actually three main story environments: short moments from the author's childhood, memories from communist Romania, her teenage and university years in South Africa, the dialog with an imaginary character  - the reader can make his own guess on who the character might be - though the style and atmosphere in this passages intentionally remind us Alice in Wonderland.

I found really remarkable that the author could seamlessly pass from one environment to the other and the reader has the feeling that this passages between different story environments make a certain sense and are not randomly inserted. Especially the imaginary character dialogues, contribute to creating a more or less poetic / somehow philosophic  atmosphere in the book and they are inserted at the right moments to interrupt the story flow and suggest the author's intention to make this book something beyond a sum of autobiographic recalls and impressions. We can consider the imaginary dialogues a way in which Irina expresses her impressions on life and the contradictory discussions sound sometimes like an inner monologue of a teenager trying to consolidate his/her conflicting impressions on life in general.

As far as the  -probably only up to a certain point - biographical parts of the book, they are a sum of different life episodes from different time and they express Irina's attitude on life, relationships, living as an immigrant in a foreign country, student life etc. Most of them are very well written. The childhood memories part have a certain mystery note to them and each story has some kind of idea attached to it - they suggest how small childhood events can influence people's lives (I really liked the childhood moment story with the disappearing rabbit for example).

The youth and student time memories suggests a somehow rebellious teen, preoccupied with theater, goth music and Japanese cartoons, ready to experiment all life has to offer and unhappy with the boring day to day student life. It is remarkable that we can understand part of the reasons behind this rebellion from the imaginary dialogues from each chapter, so everything makes some sense, even in the more "extreme" parts. There might be some excessive passages or language once in a while - at least for my taste - but, again, the writing style is very good overall, it's hard not to enjoy reading this book - it's a mix of humor, sarcasm, mystery and life philosophy well put together.

Of course, the book's fate is in the author's decision, but I personally consider this book could be published and have more readers - it is really worth it. If, in the English speaking countries, publishing would be more difficult, I think a translation into Romanian could raise the Romanian reader's (and editor's)interest and could get the book published. Anyway, I found this book definitely worth reading and surprising in its own way :)

Down the Rabbit Hole is a turbulent ride through the psyche and and misadventures of a young Romanian immigrant growing up in South Africa. The narrow nature of that brief sentence conceals the broad nature of the text, as it speaks to anyone who's ever felt that maybe they didn't belong, or as though others disapproved of their happiness.

At it's heart this is a story about duality - or, more accurately, duplicity. The world the characters inhabit is filled with hypocrisy. There's no way the flawed, imperfect characters can live up to something as perfect as their ideals, however tainted these ideals may appear to anyone who doesn't share them. Billboards splash sex where everyone can see, but the act itself is unspoken and happens behind closed doors. You can break any rule, even your own, but heaven forbid you should get caught doing it.

Our protagonist reflects this duality/duplicity wonderfully as she's torn between the needs to be her idealized self and to find somewhere she can belong. As she delves further and further down the rabbit hole the pressures of the two lives she leads and of the two people she feels herself becoming threaten to tear both her perfect worlds apart. She demands someone she can be honest with and justifies the hurt she causes through honesty, yet plays games with all those who get close to her. Fiercely uncompromising and independent, she yet finds herself compromising to others far too often, whether to protect them or herself.

The harsh reality is off-set by fantasy. Every character we encounter is clearly trying to escape to their own Wonderland, but not all of them know how, and many give up because the rabbit hole is the wrong size and they haven't yet found the bottle labelled 'drink me'. They touch the life of the protagonist, and through their successes and failings she finds the balance she needs between reality and fantasy, the duality we all need to reach to survive our own duplicity.

To call the book gripping would be an understatement. Prepare for a sleepless night (if it takes you longer than that, call in sick at work). The characters are well-rounded and intriguing, the style is fluid and engaging, the themes are apparent without losing their subtlety and the plot keeps you wondering what's going to happen next.

Having said that, the novel is very raw (intentionally so) and I have one or two criticisms. Most of these are entirely within the realm of opinion, or with a mind to making it more accessible to a wider audience. The dream sequences and present-day conversations with the OMNISCIENT VOICE (most probably God, but the question is never answered, so this could be Death, the Muse, a self-indulgent Super-Ego or another personality of the protagonist's) seem far too self-indulgent and often overlong. They are the staging ground for discussing the novel's themes in-depth. Although interesting, the core themes and ideas could perhaps be stronger if dealt with more subtlety, rather than through a diary of dreams or dialogue with the omniscient voice. This is also perhaps where the border is crossed into narcissism; everywhere else it could be forgiven.

Personal criticisms aside, I abandoned everything else I was doing from page one. I've never read anything approximating this level from an unpublished writer, and would heartily recommend this to anyone with the free time (and many without). WARNING: may cause philosophical thought.